I couldn't believe it when I found out that The Duchess of Cambridge went to Ipswich today - my home town - to visit one of her chosen charities - the East Anglian Children's Hospice. I always miss her - she keeps making sneaky appearances on Kensington High Street and now she's been to Ipswich and I missed her again!

I went wild in Oxford in November 2010 when we were sitting in an ICT and my teacher announced "Oh, he's finally done it!" Nobody but me knew what this meant - I guessed instantly that she could only mean that Prince William had asked Kate Middleton to marry her. I was so excited and had Royal Wedding fever from that moment...

So what do we think of HRH's first public speech?! It's been widely criticised for being too rehearsed, a bit like a wedding speech, too much looking at her notes... I do appreciate that she must have been nervous as this was covered by a lot of media and press.

Here is a link: http://edition.cnn.com/2012/03/19/world/europe/uk-catherine-dutchess-speech/index.html?hpt=hp_c3

One of the other talking points was that she was wearing one of her mother's dresses: 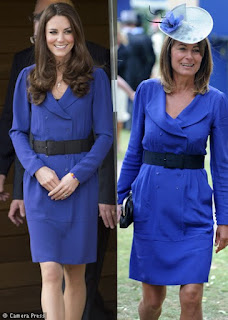