You may or may not already know this but if you don't then now you do - I LOVE FOOTBALL. Not playing it but watching it. Specifically Ipswich Town FC - which is near where I live. I am not a yob - I don't shout, swear and stamp my feet when it all goes wrong.

Last night, I was one of 300 million people who tuned in around the world to watch the Champion's League Final. Chelsea took on Bayern Munich and WON. This blog post is not going to bore you with the ins and outs of what happened - not least because I don't really know! But I was glued to it - tweeting to the world about #drogbastheman and I was on the edge of my seat during the extra 30 mins and then the penalties. My sister slept soundly upstairs through the whole thing but my dog was very unsettled...even though he is deaf and wouldn't have heard me screaming.

I saw this in the news today, which I think is hilarious: 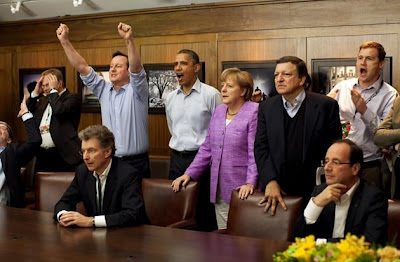 The most important World Leaders were in America for the G8 summit and decided to put a hold on the proceedings and watch the football instead. Note that David Cameron is delighted with the English victory and the German leader is furious and feeling awkward that her team have just lost (and missed two penalties that could have won them that precious trophy...)

And then it was back to business... 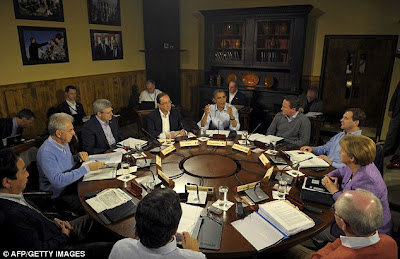 See this article for more details...