Coldplay Live at the Emirates

Towards the end of 2011, I was lucky enough to get hold of some tickets to see Coldplay playing live at the Emirates stadium in London. So on Monday evening - the same night as the Jubilee Concert - my brother, two of my cousins and I strolled out of Finsbury Park tube station and headed to the stadium. I knew a lot of my friends had either already been to the concert or were going the same night as me. One of the first people who I bump into whilst walking to venue was Sophie, who I met whilst having tea with Ruby Wax at the Ritz last week - how weird is that?! There were thousands of people at this event and it was extraordinary that I should bump into her...

It was the most incredible evening - the music was mind blowing, the crowd were electric and the atmosphere was unbeatable. Here are some pictures!


This was the view just to my left:
(the twinkling lights were wristbands which we were all given as we went in which flashed to the beat of each song!) 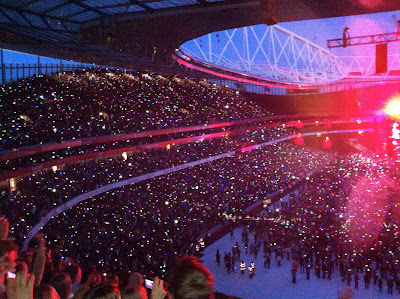 This was the view of the stage which was straight ahead of us: 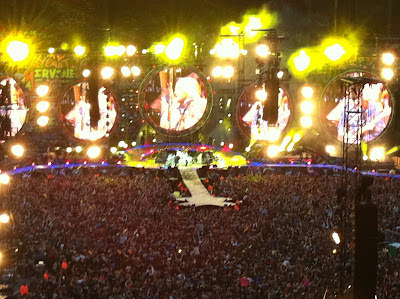 I will try and upload a video or two as well so watch this space...!
Posted by Miranda B at 16:57