Two weeks ago, I picked up a copy of the London Evening Standard newspaper and my jaw dropped when I reached page 20 and read the below article about Mimi Watts. What made my draw drop was the fact that this tragic story is about a girl who's family live very close to mine in Suffolk. She was friends of friends - which doesn't surprise me as the area I live in is very close knit and everyone seems to know each other and each other's business. What DOES surprise me is that I knew nothing about this and because I am never in East Anglia, I had missed all the local news and reports. But I gather the tragedy has also had national coverage.

My first thoughts were to get in touch with the Watts family and ask to help in some way in order to support the charity they have set up. I hope it is well supported - read on to find out why:

At around 4.15pm on December 8 last year, Nicky McAllister remembers standing on the top of a hill near Tisbury in Wiltshire, where she was spending the weekend with her brother and his family. Reflecting on how beautiful the setting sun looked at that moment, she was completely unaware that 750 miles away, on the snow-covered slopes of Chamonix, her only daughter, 26-year-old Mimi Watts, was being given chest compressions by paramedics in a frantic attempt to restart her heart.

In what appears to have been a freak accident, Mimi, an experienced snowboarder who had just begun working through a ski season in the popular Alpine ski resort, had been coming down a piste in the Grands Montets area of the Chamonix Valley when her snowboard accidentally clipped the piste’s outer edge, hitting the ridge between the hard compacted snow and the loose, soft snow beyond. She apparently fell head-first into the deep, powdery snow, which her mother describes as having the consistency of “a bag of flour”.

For all her protective clothing and helmet, nothing could prevent Mimi from inhaling the snow and suffocating. Five days later, the doctors at Annecy hospital, where Mimi had been lying in a medically induced coma on life support, told her mother and the rest of her family that the time had come to switch off the life support machine. 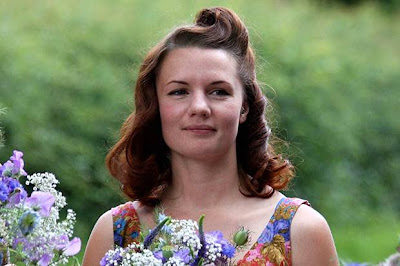 McAllister, who is 62, lives in Lavenham, Suffolk, where she runs an agricultural consultancy business with her second husband Malcolm. We are sitting in her kitchen and she is talking about Mimi, surrounded by the stacks of letters she’s received since her daughter’s death and some of the dresses and jackets Mimi, who had studied costume design at Brighton, was so fond of making.
It is better, she says, to talk about her than not to. She and Dominic Watts, Mimi’s father, with whom she also has a 27-year-old son, Rory, have been amicably divorced for 20 years and both have since remarried.

“Mimi would probably have been going quite fast, she was a competent skier, and you fall over a lot when you’re a snowboarder,” she says. “They said she’d carved into the snow and it had fallen on top of her. She was discovered by an English chap who’d seen something out of the corner of his eye. He thought it was a bird caught in the snow, so he took off his skis, walked back and found her board sticking out of the snow. He tried to pull her out, couldn’t, and called an instructor, who came within seconds. They tried to pull her out but you can’t stand in that soft snow, you just sink up to your chest. So they got the mountain police and within two or three minutes at the most they dug her out, but it took 45 minutes to get her heart beating again.”

Because Mimi had been born with a small hole in her heart, McAllister thought at first that she had suffered a heart attack. She goes on to describe how the police found a set of keys to her flat and a mobile phone, which was locked, in the pockets of Mimi’s clothing. They went to her flat where they picked up her passport, but the emergency/next of kin section was blank, so they didn’t know who to contact.

“The thing I want to point out to all young people is that, when you go away, you can’t expect to always be all right. Someday, something like this might happen to you. So just make sure they can find your parents. I hope this never happens to anyone,” she adds, “but it will.”

In the meantime, Mimi was flown to hospital. Later that same evening, Kat, the girl with whom Mimi was sharing a flat, began to worry that Mimi hadn’t returned and wasn’t answering her phone. It was only at 9am the next morning, when Kat rang again and a concerned doctor answered, that everything began to fall into place. Mimi’s father got the first call, since McAllister was listed on Mimi’s phone as Luby, Mimi’s nickname for her mother, but within a few hours both parents and brother Rory, who works in London for digital services company AKQA, were flying out to Annecy.

“When we got to the hospital, Mimi was wrapped in bubble wrap with hot air blowing because her temperature was terribly low. That was how the doctors were able to work out roughly how long she was in the snow for, because your temperature drops and she was still at only 32 degrees then. The doctor said she was unconscious and in a medically-induced coma but I still thought she’d wake up. The next day [Monday], we went back and the doctor took us into a little family room and I thought, ‘Oh, this isn’t going to be good news’. They said, ‘This is very serious’. And I said, ‘When do you think she will wake up?’ And they said, ‘She may never wake up.’ That’s when it really hit me, because up until then, I thought she would wake up and just be a bit groggy, a bit sick and be a bit confused. But I never thought she would die. And then we were all a bit dry-mouthed and open-eyed and I said, ‘What happens next?’ and he said, ‘We keep her breathing for four or five days after the accident and see if there’s any response’.”

McAllister and the family continued to sit by her side but the response never came. Over the next couple of days they were joined by her husband Malcolm, his son Nick and Watts’s wife Lucy. Then, on Thursday morning, came the final meeting with the doctors, who told them that Mimi was brainstem dead and they were going to remove her breathing tube. “I had my hand on her little heart and it probably beat for two minutes, then it just faded away and her hands suddenly went so cold. We were all with her,” says McAllister, remarkably evenly.

Sadly, because Mimi’s organs had been deprived of oxygen for 45 minutes, they were refused for donation, but on the day of her death, Rory Watts and Nick McAllister came up with the idea of establishing a charity in Mimi’s memory. Called Good Story, its aim is to help young people develop their creative ideas and make them commercially viable, just as Mimi herself had dreamed of starting her own Good Story clothing line but had lacked the business nous to get it going.
Had she lived, she had hopes of starting a course in graphic design. So far £10,000 in donations has come in and several people have already applied for help. The family plan to scatter Mimi’s ashes later this month in Chamonix, on the mountains she loved, having had her body cremated in Suffolk just before Christmas.

The cremation was followed a week later by a memorial service, attended by more than 500 people, of whom Mimi’s mother knew perhaps a hundred. “It was wonderful that so many people came and a fantastic feeling having all her friends there, but I just wish it hadn’t been Mimi.”

To make a donation or find out more about Mimi’s charity see goodstory.org.uk
Posted by Miranda B at 15:21