November is nearly over and I will allow myself to think about Christmas when 1 December arrives. Carols and tinsel in November just don't feel right. However, London is looking extremely festive and the chilly weather adds to the buoyant atmosphere. Christmas lights are up everywhere and have been switched on. I love it.

The one thing that is linked to Christmas which I have pondered on is the subject of Christmas cards.

I have previously mentioned in a post how strongly I feel about Christmas cards and their importance. I heard some rather terrifying statistics on the numbers surrounding Christmas cards...

- Sales of Christmas cards have dropped by 20% in last few years.

- We send about 800 million Christmas cards each year and it costs us £200 million.

I love Kathy Lette and I saw her debate about this on television recently. She was "for" sending cards and her opponent argued "against" sending them. I am totally on her side over this.

I enjoying nothing more than hearing the clunk (is that even a word?) of the letter box in the run up to Christmas when Postman Pat brings the mail and I used to beg to be allowed to open some of the cards my parents received.

I have bought about 80 cards this year (from here) and I plan on sending all of them - even if it will cost me £40 in stamps. Its one of the only charitable things I do each year and they have so much more meaning to them than receiving a text which is "mass sent". I'm spending less than £1 on each friend - in fact, if you look at it like that, its a no brainer. Thats cheaper than meeting up with any of them for lunch or coffee.

This is one of the cards I am sending this year. Its one of my favourites and is in aid of Mind. "Snow on Embankment" 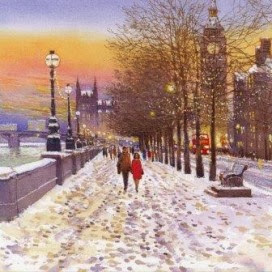 The other thing I am going to do this Christmas is lose at least 10 pounds. NO NO NO - not THAT type of pounds. Got you there, didn't I? Diets don't work by the way so I don't mean lose it in that way...

I'm going to lose the POUNDS as in ££££££ by donating to Charlotte's Helix - hope you might consider doing the same. Having been the first person in the UK to give my DNA, they need the funds to analyse the sample and look at the genes.

Charlotte is having a huge operation tomorrow (Wed) - did you see the pic of her revolting lunch today? I have filled my day tomorrow to keep busy and distract myself. She won't want me to worry. Easier said than done when she's someone that means the world to you.

Ending this post on a positive note, this week Stylist magazine have celebrated their 200th issue/birthday and Miranda Hart was given the job as guest editor - its a gem of an issue, which I went out of my way to get my hands on today, and I think she ought to consider a career change. Totes amaze-balls.

Here is what you are missing out on if you didn't get a copy:

I must let you go - you've got Christmas cards to write haven't you? Go on - if in doubt, just write one. You may even receive some in return and I guarantee you will feel better for doing it.
Posted by Miranda B at 23:37