As previously mentioned, I gave my first little public speech recently - it was Miranda de Barra's main event. My first attempt at drawing together various issues related to mental illness and stamping stigma -

Tonight, I am here in fervid support of Miranda de Barra - and to eat lots of delicious cake. I’ve also come to say that I am one of the one in four who also suffers from mental illness. I have, in fact, been plagued by mental health problems since my early teenage years. I am now 23. I write a blog where I have written about my troubled past. However, this is the first time I have ever spoken publicly in front of a group of strangers about the subject of mental health and what I have been through. 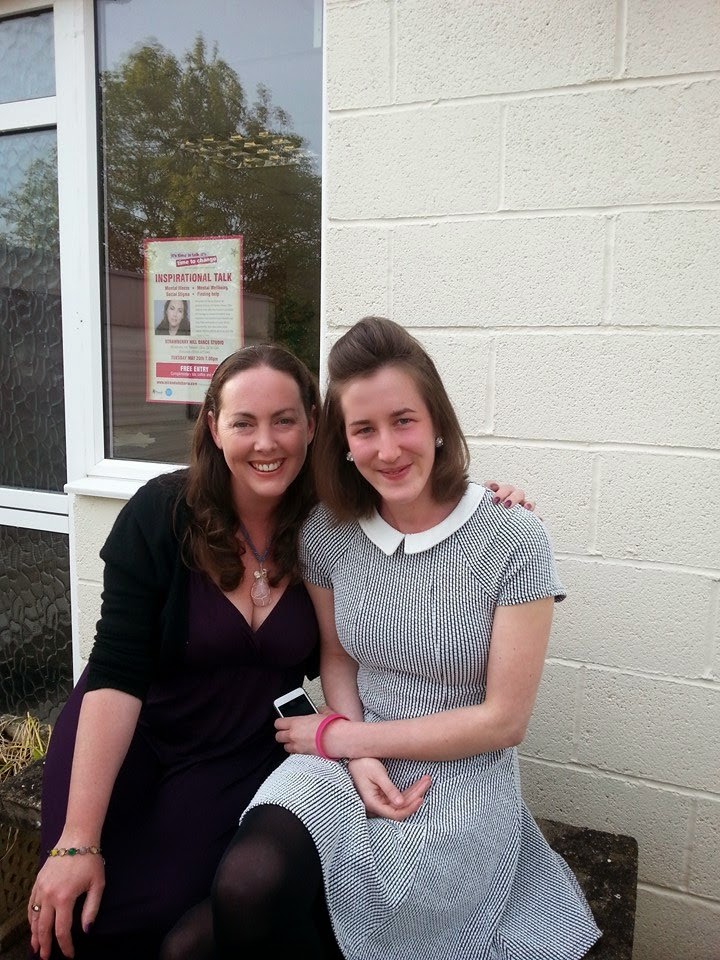 I am very aware that you haven’t come here tonight to hear ME speak so I will try to keep this very brief. I’ve recently finished a Nutrition degree, which I hope will lead to a fulfilling and interesting career in the food industry. However, my main aim is to make a significant contribution to eliminating mental health stigma, which sadly still prevails. There are still many misunderstandings about mental illness. Nobody is protected or immune – rich, poor, young, old. I’ve had depression and anxiety for a while now – and this spiralled into an eating disorder 5 years ago, which lead to me spending several months in hospital.

I didn’t get depression because I hated maths, have big feet, went to boarding school, didn’t eat my vegetables as a child or don’t like the Beetles. There are still too many myths that surround this disorder. It can happen to anyone: it does not discriminate. Some of my closest friends are the ones that I met in hospital during treatment. Depression and other mental illnesses also came into their lives – affecting them and those around them. We understand each other, listen and reach out when things are tough. We don’t tell each other to “Perk up” or “Pull yourself together” when one of us is having a bad day. Telling someone with depression to “Perk up and get a grip” is as useful as a chocolate teapot.

I encourage you to look around the office. Look at your immediate and wider family. Look at your close circle of friends. The person with a mental illness might be sitting right next to you. They might be the joker, the hard worker, your most intelligent colleague, the one you would never suspect to be suffering – because that’s the thing: those of us who have depression, panic attacks, suicidal thoughts (and more) are so scared of the three in four who are “normal” finding out that we are BRILLIANT at covering up. We smile, we say we are fine, we get on with our day as best we can and often suffer in complete silence. What is normal, anyway? Do you want to hear my definition of FINE??

Fucked up, Insecure, Neurotic and Emotional..

For the record: I am not pleased or proud to have a mental illness but I am not going to sit in silence for fear of never getting a job just because I have depression. This is now my job – to help others by speaking up about it and encourage them to do the same.

Last week, The Duke of Cambridge hosted a gala dinner at Windsor Castle in order to raise money for the Royal Marsden Hospital. The great and the good were there, to support and raise money for a hospital, which is frankly one of the jewels in the crown of the NHS. People are only too eager to support it. For the celebrities, it involves a bit of self promotion as well as being aligned to a good cause. As I looked at the photos of the stars, I couldn’t help but think of the NHS establishments rather more in need of help than an A list hospital. How about a gala dinner for a mental health unit I know that is struggling financially? Will the stars come out for unsexy causes too..?

More funding is needed for essential research into neuroscience. According to the World Health Organisation, by 2020 depression will be the second leading cause of world disability and by 2030 it is anticipated to be the principal provider to disease burden. These numbers indicate the sheer significance of depression in terms of public health, but behind these facts and figures there are individuals who endure this debilitating illness on a daily basis and this is unquestionably more critical. It’s true that nobody understands what it is like to have a mental illness unless you go through it yourself.

The overall agony that an individual with mental illness goes through can only be comprehended if one reflects on the horrifying fact that many sufferers prefer death (committing suicide) to their torment. In light of these terrifying statistics, I also hope more funding goes towards the treatment that many people so desperately need. Waiting lists need shortening so that people get help in time, before its too late. Many people underestimate the impact that mental health has on an individual level, and on society.  However, mental illness accounts for a third of all illness in the UK and costs the NHS an estimated £105 billion a year. These figures will undoubtedly increase.

We need to take much more notice of each other. We also need to learn how to be mindful and listen to our bodies (much easier said than done when you are plagued by anxiety and critical voices…). It is much more than a case of “eating your five a day and exercising regularly” – this can hit the most regular juicers and gym goers. You can be rich, poor, young or old, be happily married, have a highflying job or be a celebrity and still suffer.

Two years ago, I won a competition – the prize was life changing. Tea at the Ritz in London, with none other than Ruby Wax. Ruby set up a social networking website called Black Dog Tribe and the competition was encouraging people to write in sharing their experience of mental illness. The most I had ever won prior to this was a goldfish at a country fair. So I was genuinely surprised to receive this exciting email with news that I was the winner. It was the start of a truly wonderful relationship with Ruby. Nobody has worked more tirelessly than her at educating and inspiring people all over the world on the subject of mental health. She’s the poster girl for mental illness – and possibly one of the most generous, humble, hard working and intelligent people I know. Recently, I nominated her for an award as part of the Depression Alliance charity and we were invited to Kensington Palace to hear if she had won. And guess what? SHE DID!

I would give away a kidney, my dog and friendship with Ruby Wax and pretty much anything else not to have gone through it – but I’ve got depression and if this is what life has thrown at me so far, I can face whatever the next challenge is with more tenacity and grit than ever before.

We need more Miranda’s in the world who are prepared to stand here, shoot the black dog and stamp the stigma – I am so confident we will do it.

What do you think? Personally, I loved doing it. Can't wait for the next!
Posted by Miranda B at 14:51