Last weekend, I was lucky enough to attend the first NHS Youth Forum conference in London - its aim was to celebrate positive mental health amongst young people. Thank goodness for having the wonderful Kat Cormack with me as she was able to advise on where to go and what to look out for. 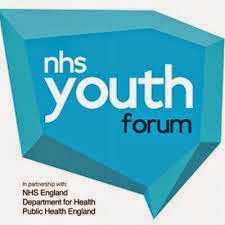 I met Dr Radha Modgil, who is a London GP and who has also worked a lot in the media (BBC Radio 1 Surgery etc..)

I went to a workshop called "Fight the Pressure", which was run by Young Minds.

The first question we were asked was "What comes to mind when you hear the words "Mental Health" ? I said stigma. Other people said stress, waiting lists, isolation, lack of funding...

- We are all on the mental health spectrum. Some people have better mental health than others and some have to work harder at mastering emotions.

- 1 in 10 children and young people aged 5-16 suffer from a diagnosable mental health disorder. (I thought this would be higher)

- 1 in 6 young people people in year 9 or above have deliberately self harm.

- 60% of young people feel like a failure when they don't get good grades.

- 50% of young people have been bullied. (I thought this would be higher)

- 60% of local CAMHS budgets have been frozen since 2010. 96% of the Birmingham CAMHS budget has been cut in then too.

- 30% of boys have skipped meals in order to stay thin.

- 60% of young people know where to get help with anxiety and depression.

Interestingly, apparently we need to follow in the footsteps of the Australians as they are way ahead in terms of how they treat young people with mental health problems. However, I hear that the Australians on the ATDT forum don't have a good time at all. Ironically, their model initiated from the UK but apparently we have no funds or means to implement it over here. Oh dear.

The final activity was a "Mind apples" exercise - the same thing that I did at pwc at few weeks ago. What five things will you commit to every day to improve your mental health..? 5 a day for your mind...

There were some fascinating services being exhibited at the "market stalls" which I explored during the lunch break. I particularly liked "Monkey WellBeing".

I love days like the above - the chance to learn something new, meet new people, give out a few business cards / network and come away with lots to think about. And its uplifting to see so many young people taking an interest in mental health.

The best part about the day was that my phone charger broke the night before so I woke up with no phone battery and no means of charging it. I was able to concentrate for the entire time and not have any distractions. Joy.


Why not join the conversation...
Go to @NHSYouthForum or #NHSYF
Posted by Miranda B at 20:13