This time last week, I was emerging from a trip to prison ! Before you are alarmed, let me say that I was a guest at The Clink restaurant inside Brixton prison and had not, in fact, been arrested... 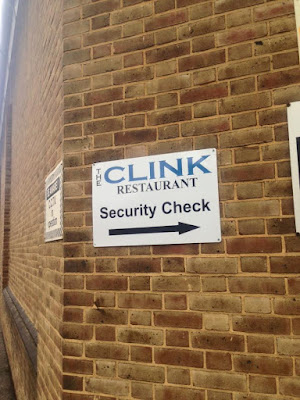 The Clink in Brixton is one of five restaurants in UK prisons that was set up by Alberto Crisci MBE, the then catering manager of the Clink in High Down Surrey, who identified the need for formal training, qualifications and support for prisoners in finding a job after they were released.

Ruby Wax and I were a guest of Lady Edwina Grosvenor, who is a founding trustee. We met Edwina because we had met her husband Dan Snow earlier this year when they were both guests on the Mel & Sue show.

We were totally blown away by what we saw (and ate).

Once we had signed in, handed over all our belongings and been searched (like in an airport), we were escorted through the main prison doors (a big sliding thing - wide enough for vehicles).

The restaurant was a short walk through the actual prison - it was strangely eerie and we didn't see any prisoners wondering around - apparently most of them were doing activities at that time. We asked to see an actual cell but sadly that wasn't allowed. You could see the little windows to the cells so we wondered if we were being watched.... There is probably not a speck of grass where you can't stand without being seen on CCTV.

The restaurant was unbelievably smart - amazing art on the walls done by prisoners - lots of small tables and a private dining room for more private meetings.

The menu was an absolute feast: (see here for the full Summer menu). I had....

I would have taken a photograph but we were not allowed to take ANY of our possessions into the prison. It felt like a "Digital Detox" - so refreshing to be able to actually focus and not having to worry about checking for messages all the time (there was plenty of time for that in the taxi on the way home!)

We were given a tour of the kitchen and introduced to the chefs and waiting staff. Everyone working was currently serving a prison sentence. I loved engaging in conversation with these people - asking how long they had been there / what they hoped to do when they leave.... It was interesting to note that they used real / sharp knives to chop and prepare the food but when we came to sit and eat our food - we had to use plastic knives and forks...

I learnt that many prisoners finish their time in Prison and at The Clink and go onto do great things - Edwina mentioned that one person had got into a top London drama school... and several go off to work in restaurants and hotels (Carluccio's etc...)

The whole experience was so impressive - it is great to know that such a thing exists to help people rebuild their lives for when they are released from prison.  And the charity is clearly making a real difference to many people's lives. I hope I can achieve even a tiny bit of what Edwina has done in such a short space of time.

The Clink has plans for expansion - I can't recommend it more highly. I am already planning my next visit !