Yikes ! What a long time since my last blog post. It was a busy and fun summer - I ended up with a blissful 8 weeks off. More about that later. I have also had no proper internet as just moved house but am now back online....

The reason for this blog post was to draw attention to the brilliant Amanda Palmer, who I am sure I have written about before. She did a powerful TED talk on the Art of Asking and then wrote an even more amazing book with the same title, which I read over the summer.

She wanted to raise children's books for the New York Public Library so did something rather extraordinary to get people to come and donate. Watch the below video - its mind boggling.

Her work is funded by people's monthly donations / pledges on Patreon and it is one of the greatest things I am able to support.

It was the last thing she will do for a while as she is literally about to have a baby (she announced that with a beautiful kinda-naked picture of herself on Instagram). 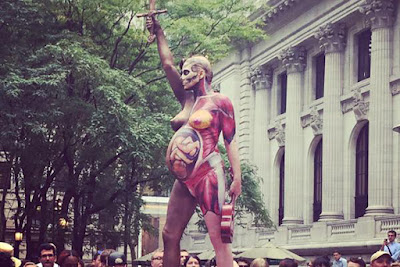 PS She is married to Neil Gaiman.. As in THE awesome writer Neil Gaiman.
Posted by Miranda B at 15:37