Elegy at the Donmar Warehouse

There was no better way to spend a Monday evening than at the Donmar Warehouse watching Zoe Wanamaker performing in Elegy. I have seen Zoe performing once before on stage and was yet again completely blown away by what I saw. 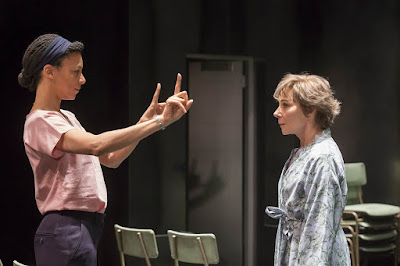 
Lorna has a devastating and terminal brain disorder, with the only treatment to cure it being a drastic method that would also remove her memories of the earlier 20-30 years - as well as the moment she met fellow teacher Carrie at a choir rehearsal.

What if every neuron in the human brain could be mapped and decoded? Every act of human behaviour catalogued and wholly understood? Elegy imagines a very-near future in which radical and unprecedented advances in medical science mean that it’s now possible to augment and extend life.

Through the beautiful and moving story of three women who’ve made the choice between love and survival, Elegy explores a world in which the brain is no longer a mystery to us. But at what cost?

Could you fall in love with someone all over again if you had the memory of meeting them first time round removed?

It was one of the most thought provoking plays I've seen in ages, quite short - only an hour and a quarter long - but with so much emotion and so many questions raised in such a short time, I don't think I could have coped with it being any longer in length.

Covering love, death, grief... its a very personal story. I'm not sure what I would do in Lorna's situation - but who better to discuss it with than with Zoe herself afterwards. Such a treat.